Posted onOctober 25, 2021.by uzair.Posted innews for devs. No comments yet .


Spinnaker is a continuous integration/continuous delivery tool that was started by Netflix in its quest for more agility. This posting will show how to get hands-on experience running Spinnaker on Windows 10.

Minikube provides the ability to run a Kubernetes cluster on local Linux, Mac, or Windows. It can therefore serve as a sandbox environment for Spinnaker training, experimentation or even to keep ones local development environment up to date with all the latest commits.

Two subsequent postings will demonstrate how to:

This hands-on tutorial presumes knowledge of Windows, basic networking, SSH, vi, and a few basic Linux commands. It will, furthermore, be good hands-on exposure to Kubernetes and Kustomize should the reader be unfamiliar with it. Accounts at Github and Docker hub will also be a plus.

After completion, the reader should have Spinnaker running, but more importantly be in a better position to understand the guides on the official Spinnaker website.

This guide was tested on a notebook with 40 GB of RAM running Windows 10 Professional.

The requirement for Spinnaker Minikube on Windows is an installation of Hyper-V, 16 GB of RAM, and four cores. The author used 17 GB.

Halyard, the configuration service of Spinnaker, runs as a Docker container and requires 2 GB of RAM over and above the requirements of Docker.

Based on the above, the minimum requirement to run on a single machine should be Windows 10, 32 GB of RAM, and four cores. However, the Minikube cluster can be run on a second machine over a local network. The IP address of the cluster hosting Spinnaker is after all configured in the KubeConfig of Halyard as can be seen below. The Spinnaker install guide also shows how to run Spinnaker on a single instance of Ubuntu as an alternative to the distributive fashion, but this way is less scalable and for smaller constellations. Hyper-V is not required for this second approach for obvious reasons.

Configuration of Halyard can take a long time the first few times. A backup can be created at any stage so the process can be resumed at a later stage.

The exposed IP address of the Hyper-V network adaptor (default switch) changes every time one restarts the virtual machine running Minikube. Towards the very bottom, an explanation is given on what to do should this happen.

Sometimes the Minikube IP address does not show on the Hyper-V manager. One can also get it from Hyper-V by right-clicking -> connect, typing root, and running ifconfig from the resulting root prompt.

Unless otherwise stated, all commands are to be run from a Halyard prompt.

The first step is to follow one of the myriad online guides to install Hyper-V onto your machine. On the author’s notebook running Windows 10 Professional, this only involved downloading and running the install. However, be prepared to tinker in the CMOS to switch on virtualization.

Once Hyper-V is running, you can proceed to download and install Minikube. Open Powershell Administrator and run the following command after the install has finished:

This tells Minikube to:

Upon successful completion, head over to the Hyper-V manager and take note of the IP address of the cluster for future use: 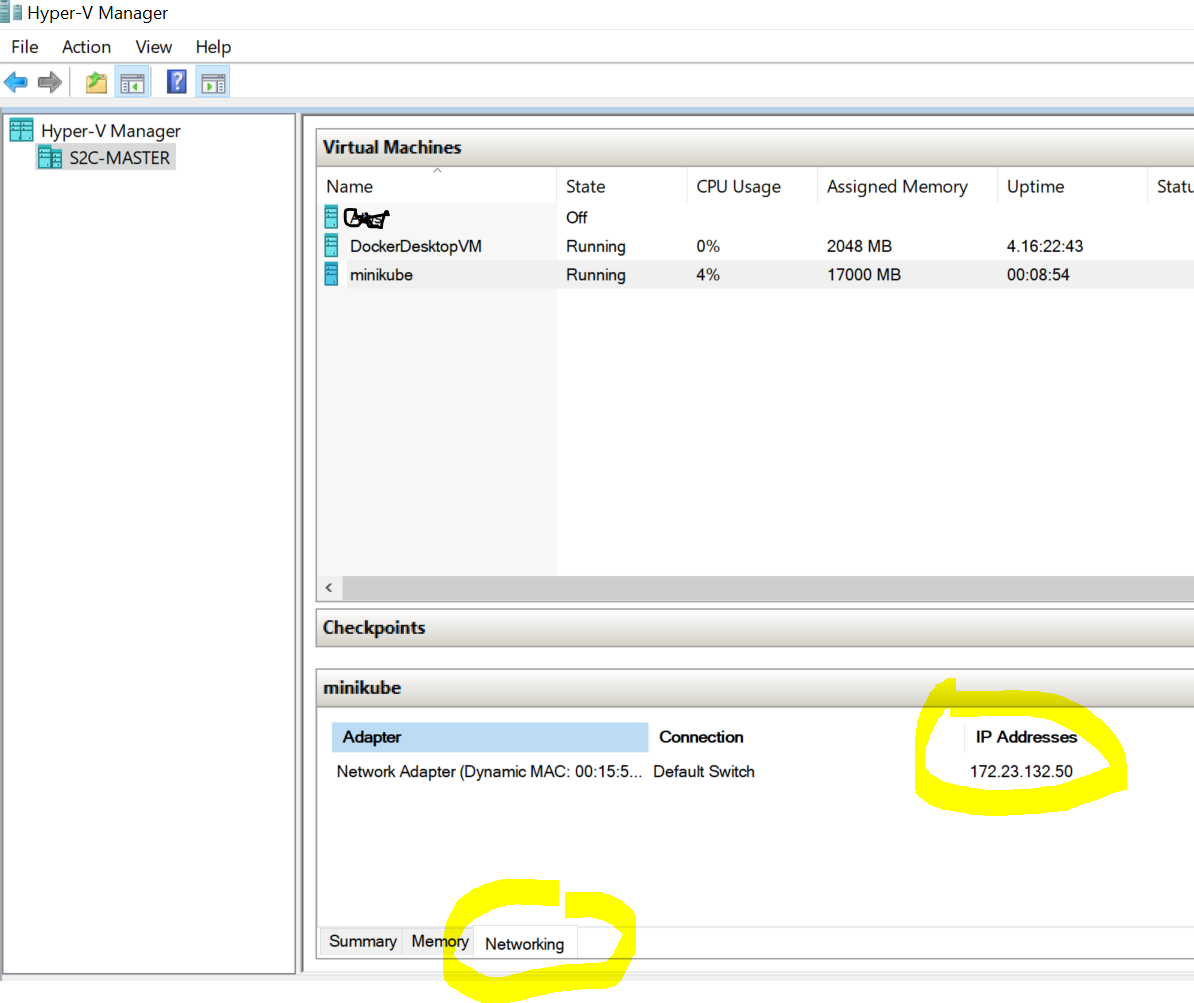 Note the docker desktop running Halyard. We will get to this next.

Follow the steps of the Spinnaker guide to install Halyard using Docker.

Halyard is now up and running. Next, we have to configure a database for Spinnaker.

MinIO the keeper of metadata

Spinnaker can use various databases, as can be seen here. We will use MinIO, an AWS S3 clone that can run out of the cloud.

Next, we will configure Kubernetes as the host for Spinnaker.

Spinnaker can run on various cloud providers. We will run it on our Minikube cluster and follow the steps to configure Kubernetes as a cloud provider:

Next, Spinnaker will be started so its microservices can be created and some of them be exposed outside the Kubernetes cluster.

The exposed IP address of the Minikube cluster changes all the time. This IP address will be tracked as a new line entry into the Windows hosts file for ease of reference:

The final configurations can be started:

NOTE – The * should be replaced with the rest of the kubelet’s name.

Normally the command “hal deploy connect’ follows next to automatically forward ports out of the cluster over SSH. We will follow a different route  to open up Spinnaker for use outside the cluster.

Opening Up Spinnaker for Evaluation

DISCLAIMER: This section should only ever be done on Minikube during evaluation/testing of Spinnaker and never in production.

Was it not for the fact that security has not been configured yet, Halyard would be able to apply the configurations and start Spinnaker. As it stands, Spinnaker will start up closed up to the world outside its Kubernetes/Minikube cluster.

One can port-forward out over SSH, but the problem is that we are running all on one machine and port 9000 is already forwarded by Docker. This can be seen in the command that started Halyard. It might be possible to configure the UI/Deck microservice to listen on a different port, as Spinnaker provides for fine-grain configuration. However, since Spinnaker will be running encapsulated inside a local machine, a different route can be taken. We will namely open up some of the Spinnaker micro-services for outside access by changing their type from ClusterIP to NodePort:

Spinnaker should be up and running on the exposed port of Deck: http://spin.s2c.co.za:30741 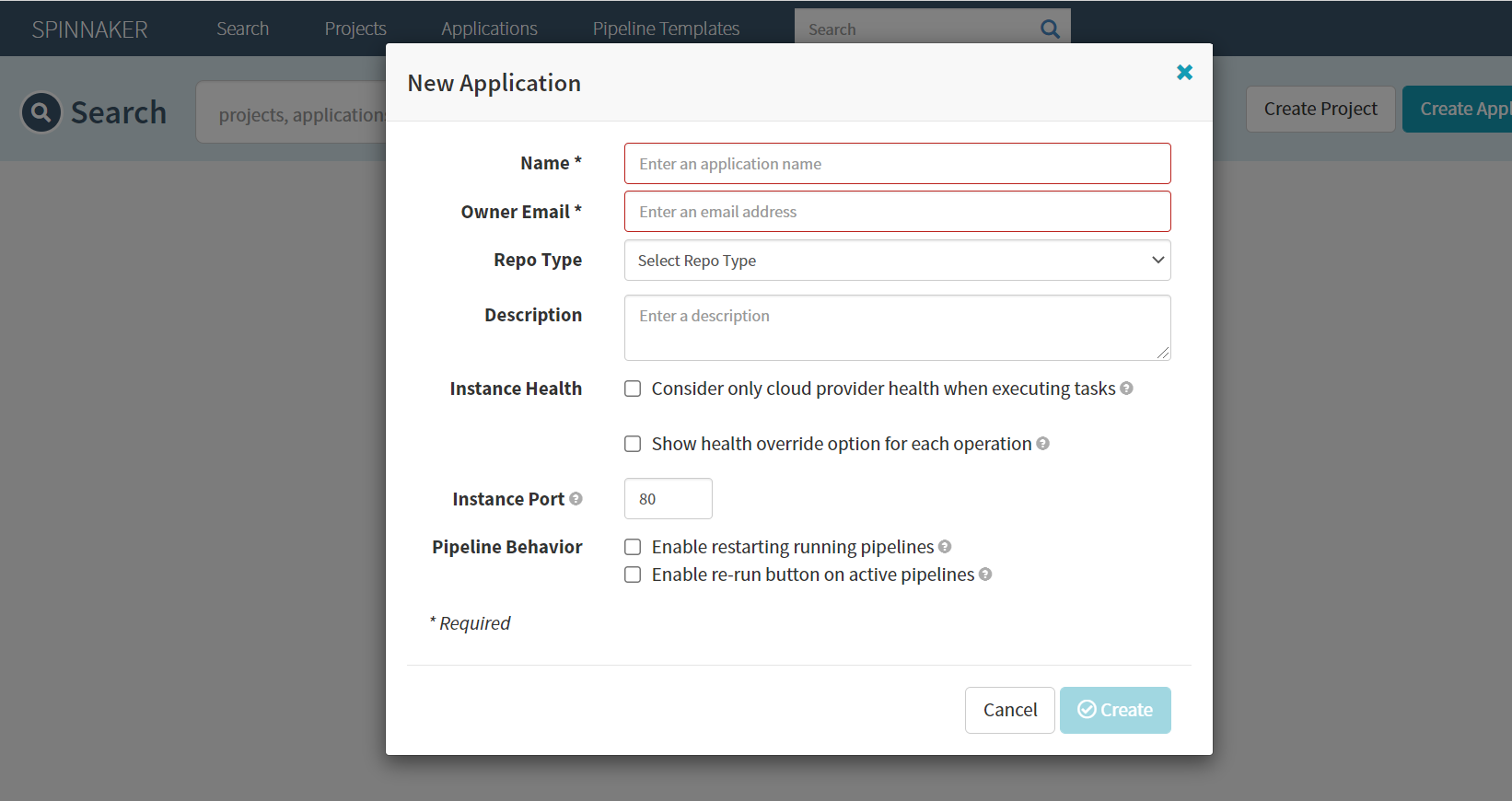 Enter name and email, followed by clicking on Create:

Should the creation of the application take very long and a message concerning Gate eventually pops up it means that something went wrong during the overriding of Gate and Deck. Revisit the commands in the section outlining how to open up Spinnaker for evaluation. Special care should be taken that correct ports are used and the entry in the host file is correct.

The outward IP address of the Minikube cluster should change following a restart from Hyper-V. Should this happen, remember to:

As such, it is worthwhile to commit halyard so it can be stopped and restarted at any time by running the following commands from PowerShell on the Windows laptop:

Congratulations! Spinnaker is now running locally out of the cloud, and you placed yourself on the map of Spinnaker knowledge. You should be in a better position to understand the various guides on the official Spinnaker website.

It is now an opportune time to familiarise yourself with the various concepts of Spinnaker and where to find them on the GUI. Since Spinnaker is cloud-neutral, it has its own names to the equivalent Kubernetes entities, as can be seen in this concept mapping.

Unfortunately, your Spinnaker constellation is like a car that can start but cannot get into gear. Since deployment pipelines consuming Docker Images and Deployment Manifests are lacking, one cannot do anything of value yet. This will be the purpose of the next posting in the series — the ability to deploy a microservice to the default namespace of the Minikube cluster.