Posted onJanuary 21, 2022.by uzair.Posted innews for devs. No comments yet .


Azure pipelines is a cloud-based continuous integration and deployment (CI/CD) platform to build, test and deploy applications to cloud environments like Azure, AWS, or GCP through Kubernetes Services, Azure Web Apps, and Azure Functions. Azure DevOps pipelines can build container images, push the images to a container registry and deploy these images to Kubernetes environments of our choice.

Setting up a pipeline that leverages a custom container registry or deploys to multi-cloud Kubernetes environments requires cloud-specific expertise and is time-consuming. For instance, building a pipeline from scratch requires:

gopaddle is a no-code platform that helps to build, deploy and maintain cloud-native applications across hybrid environments. It automatically generates Dockerfiles and Kubernetes YAML files through the intelligent scaffolding process. gopaddle exposes APIs that can be extended and integrated with other pipeline tools like Azure DevOps.

By integrating gopaddle with Azure DevOps pipelines, developers get the no-code automation with the flexibility of deploying to multiple cloud platforms. The following table illustrates the additional capabilities developers get by integrating both solutions:

Having explored the advantages of using gopaddle with the Azure DevOps pipeline, let us take a look at the process of integrating these two platforms. We will explore this in the context of a .NET Core application in the GitHub repository. To build a pipeline for this application, we need to initialize the project and create Docker/Kubernetes artifacts like Dockerfile and the Kubernetes YAML files. We can leverage gopaddle’s intelligent scaffolding process to generate these artifacts.

The below workflow explains the step-by-step process of initializing the project. 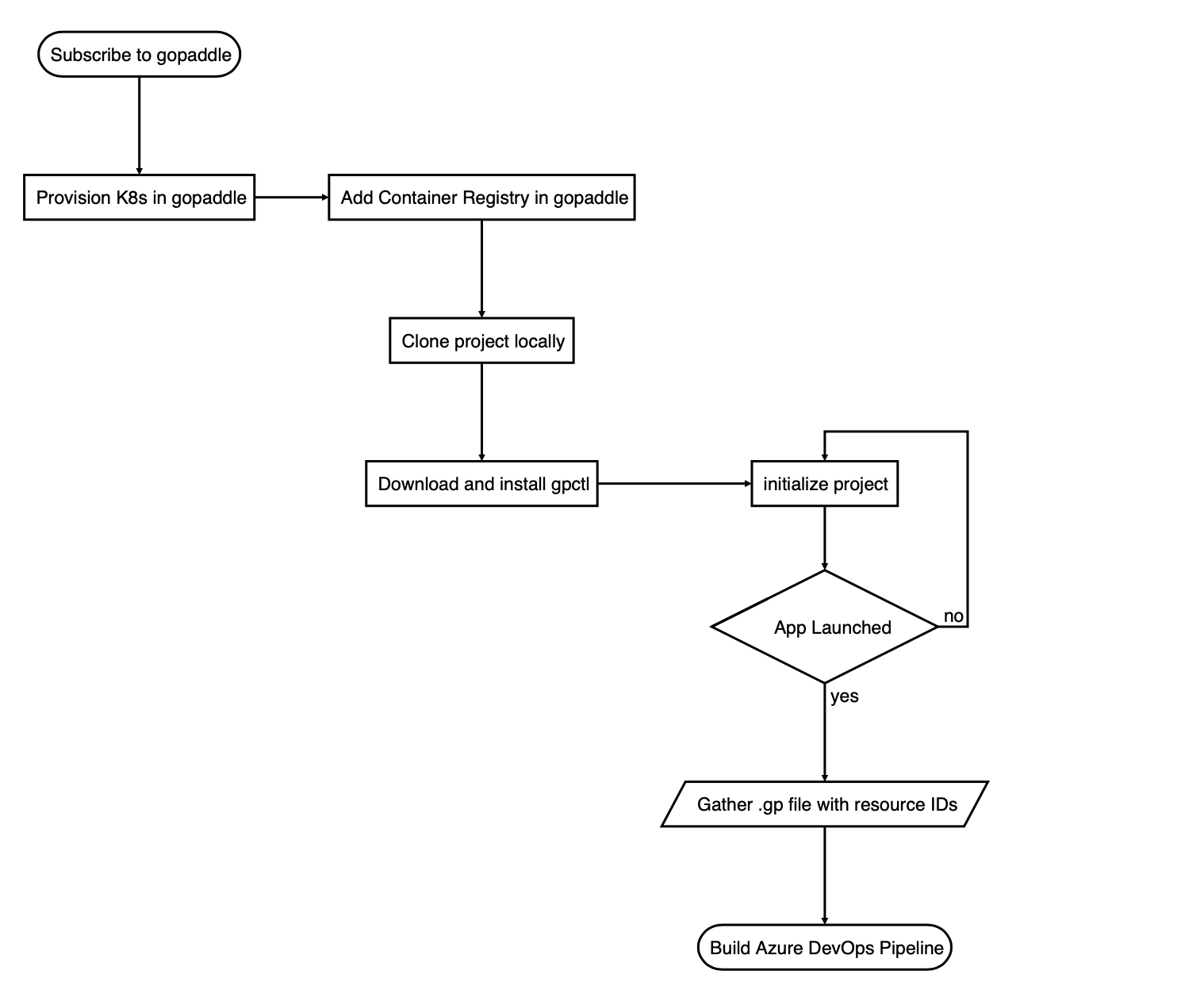 b. Provision Kubernetes cluster: Follow the steps here to provision a Kubernetes cluster on AWS/Google/Azure. If you are provisioning a GKE cluster, then we need a minimum capacity specified below to build the eShopOnWeb container in this cluster.

c. Create an Allocation policy in gopaddle UI, with a minimum capacity for building eShopOnWeb container.

With the above node size and the allocation capacity, it takes approximately 4-5 mins to generate a Docker image. If you would like to speed up the build process, then you need to increase the node capacity and the allocation policy.

d. Add a container registry to gopaddle by following the steps here. This registry will be used to push/pull the Docker images during the build and the deployment process.

Note: We need to fork this project to our local GitHub account as the Azure DevOps pipeline requires access to create a pipeline script in this repo.

g. Initialise the project from your local desktop: Create 3 scripts for building, starting, and checking the health of the application.

i. Initialise the project using gpctl.

Note: During the init process, choose the Kubernetes cluster to build and deploy the application and choose the Docker registry to use for pushing the image.

Once the gpctl init completes, gopaddle creates a .gp file with a list of resource IDs that can be used to build the pipeline.

Now that we have initialized the project, it is time for us to create a pipeline in Azure DevOps.

From the Azure DevOps subscription, let us perform these steps.

a. Create a new pipeline. 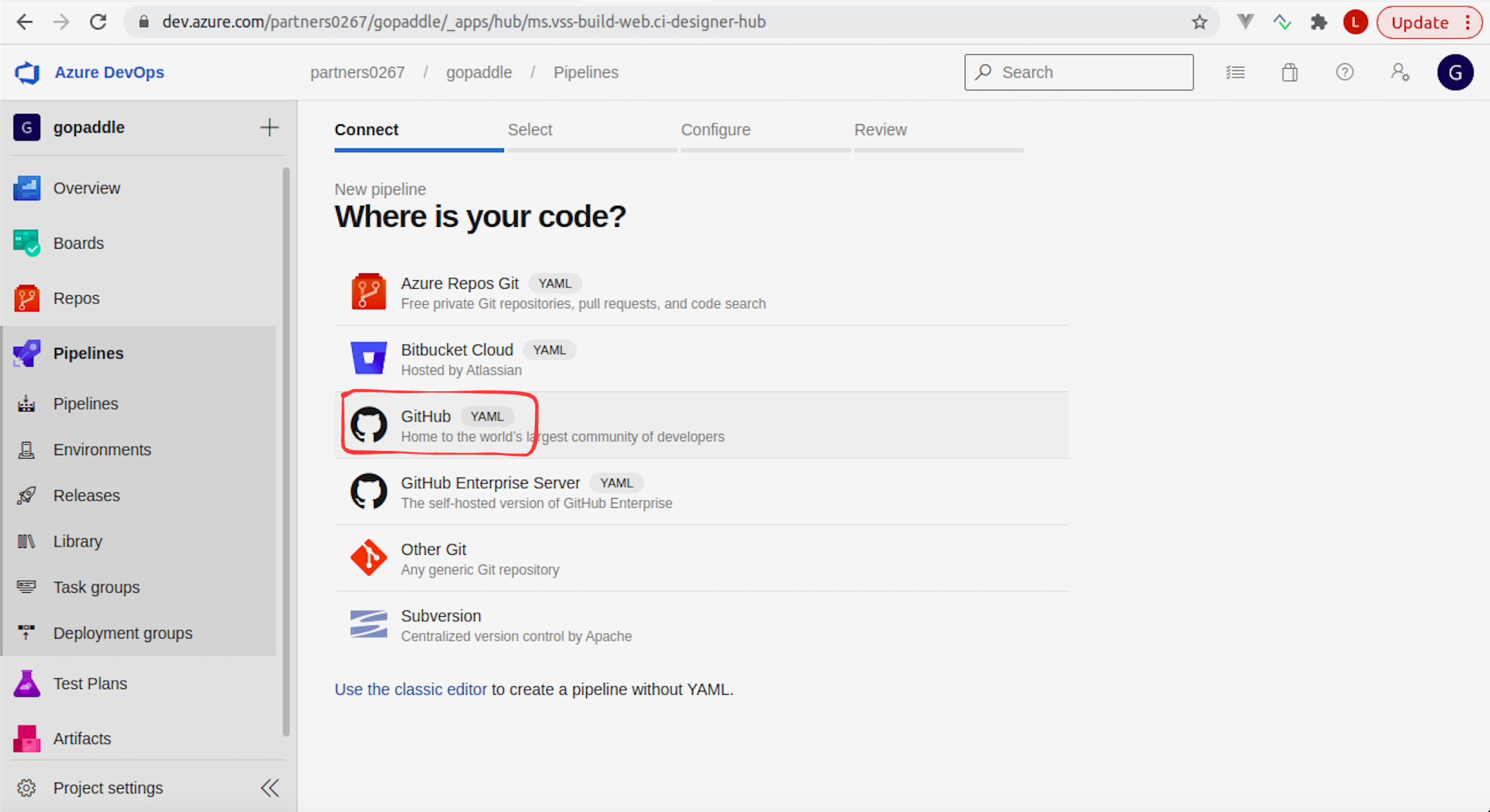 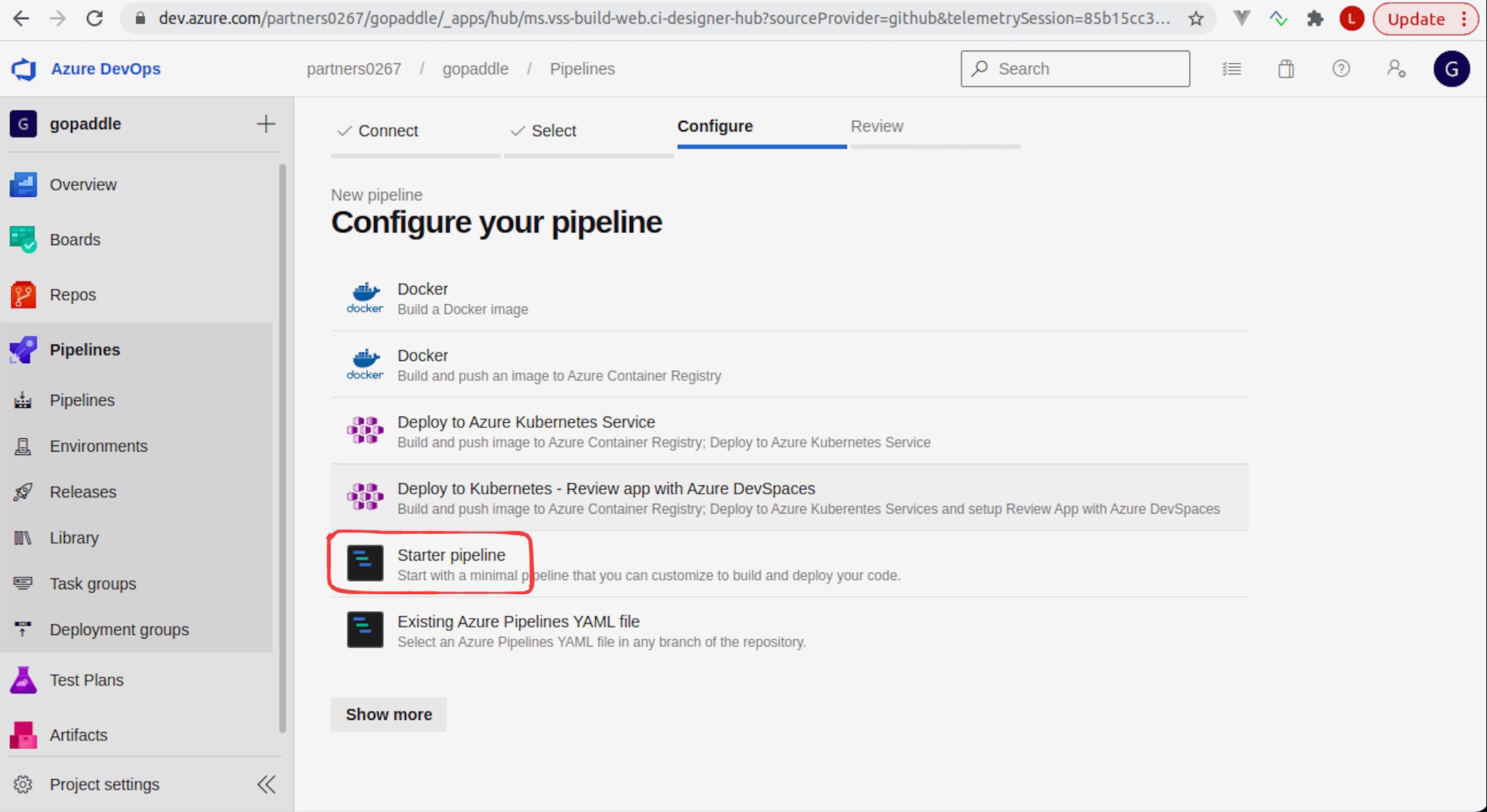 Once the pipeline is created, a pipeline script file named azure-pipelines.yml gets added to the project root folder in the GitHub repository.

d. Edit this pipeline script and modify the contents based on the template script from here.

f. Replace the contents of the variables section in the pipeline script with the values from the .gp file generated during the gpctl init process.

A Closer Look at the Pipeline Script

The pipeline has 2 stages – Build the application and Perform a rolling update once the build completes. But this pipeline can be extended to include more steps like running a regression suite or sending an email to the project stakeholders.

As soon as the code is committed to the project, Azure DevOps detects a change and triggers the pipeline. When the pipeline script is executed, it calls the gopaddle API to trigger a container build. The container build process builds the container image in the pre-configured Kubernetes cluster, pushes the Docker image to the container registry. The pipeline script waits until the build process is complete. The second script, picks the build information from the previous step – like the build ID, commit description, etc and initiates a rolling update using the gopaddle API.

You can find a brief demo of the pipeline integration:

As illustrated, the modernization process takes about 10 minutes (most of this time is spent on building the container image and deploying the application) to generate the Dockerfile and the Kubernetes YAML files and about 10 minutes to create the pipeline.

Through a simple integration, we get the benefit of modernizing the application and creating an end-to-end CI/CD pipeline by integrating gopaddle and Azure DevOps pipelines.